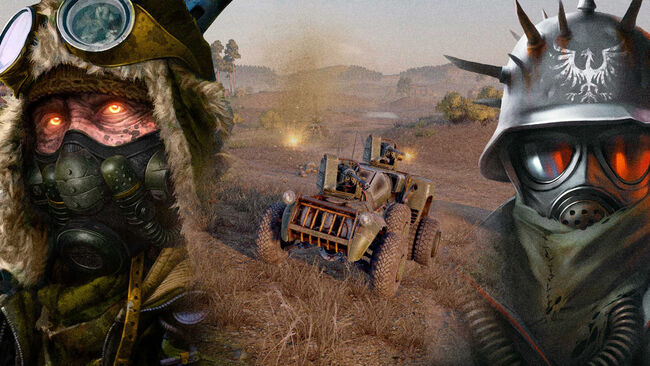 Mitchell went to the Valley to test the new tracks. According to the old military custom, the sooner you bathe the tracts in the mud, the longer they will serve you. Luckily, just the day before, warm spring rain passed here and there was a smell of blooming greenery all around. And on the off-road you could cover not only the tracks in the dirt, but the whole tank as well. For his “ritual” he chose the most impassable areas, where deep furrows remain in the thick layer of soil. When the whole vehicle was covered with a five-centimetre layer of dirt up to the tower, Mitchell began to turn around in order to return home.

Not far away he noticed a hangar, to which from the other end of the Valley were approaching... He looked closely... Yes, it was the Lunatics. Fate had not yet brought them together personally, but he had seen the results of their work. He heard that these people are willing to do unpleasant things because of the slightest possibility of profit. And sometimes it wasn’t about profit, but about the opportunity to bring trouble to anyone.

Seven cars were heading to the hangar. They were assembled out of the worst kind of junk, and their sides were covered with large-caliber machine guns and cannons. They rushed to the garage entrance without seeing Mitchell, but he decided to hide the vehicle in the bushes just in case. The newly acquired “mud” paint created the best camouflage for him.

Something happened that no one could have expected — the side brick wall that Mitchell was looking at shattered into pieces, and a tank flew out of the dust cloud! The Lunatics were dumbfounded by this maneuver, which gave the hangar owner two seconds to turn the turret around and fire a shot. An explosion covered one of the cars, hitting the other two with a powerful blast. The tankman couldn't allow some crazies to dismantle a sacred relic into parts while killing another tankman. He started the engine.

For the Lunatics, that day was surprisingly bad. They were on their way here to take away an unfinished tank at the tip of a trader who had sold parts to an unsociable design engineer the other day. But the military vehicle wasn’t just 100% operational — the defender also had a comrade with the same giant vehicle!

The second tank made its entrance with a fragmentation shell burst, which easily pierced the armor of the thickest car. At the same moment the bullets pounded into the stranger’s tank, digging into the reinforced plates of the hull. Without slowing down, he fired another burst, destroying two vehicles at once. Mitchell rammed one of the attackers and continued to squeeze tons of scrap metal into a pile. The last two shots sounded almost simultaneously, as if on command. Two targets moving away from them didn’t manage to escape.

After an hour of lively conversation about the battle and the design of their vehicles, both tankers realized, for the first time in a long while, how lonely they had felt before.

— Yeah, I’ll rebuild the wall, that’s not a problem. I’m still alive and that’s what matters. My name is Mateusz, by the way. Good to meet you.