In the old hangar sheltered by sand and sunburned by the sun, it is now hard to recognize the heart of a military equipment test site. It was a long time ago. Lots of sunsets back. But even then almost all the time there was a sleepy silence. The powers that be came every few moons when a new-born prototype of a vehicle or weapon was ready to take the first breath of electrified air. On the outside arena recreated the conditions of a real battle. In the neighborhood, guns were shot and the range of a bullet was estimated. On the racetrack, newborn monsters jumped from springboards and slid along ramps during sea trials. And the rest of the time ... Silence. Nobody wanted to linger on the ground after the test.

The madness that engulfed the cities during the outbreak of the Cross, could not get so far into the uninhabited land. Therefore, neither the landfill nor those who were lucky enough to seal the gigantic door from the inside did not suffer. Warehouses were packed with food, tanks - with fuel, weapons rooms - with cartridges. As if someone was preparing to meet the end of the world. With comfort.

This saved the lives of several dozen Waderkvarn employees who were in the service in the hangar that fateful day. Remained outside less fortunate. And when dozens of hands were beaten into the walls and tens of voices were asked to be let in - silence was the answer.

When the gates of the hangar opened again, its inhabitants were ready to play by the rules of the new world. The horsemen began their bloody harvest, urging on the apocalypse. They quickly became influenced by thorns and made a gang of the most desperate thugs among the survivors around themselves. Those who wish to regularly flock to the landfill, but only the best of them allow them to move to the hangar and enjoy all its benefits.

The map was created only for the “Test Drive” mode, so that players can try their collected craft before they go into battle. On the map you can call several AI bots that will attack the player. 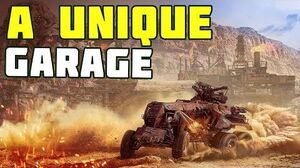 A unique garage of the Horsemen of Apocalypse Crossout 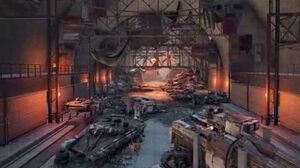